Hurricane Ivan, a dying monster, blew itself out in rain and thunder over western Massachusetts the weekend of September 17-19, 2004.  It poured and it roared.  But inside the Lodge and satellite buildings at rustic Bucksteep Manor in Washington Mass., several score of free-reed enthusiasts pumped back as good as they got, answering the storm with a musical tohu-bohu.  It was the 16th Annual Northeast Squeeze-In (fondly known as NESI).  For accordionists and concertina players and their stringed accomplices, nothing dampens the sheer fun of this retreat from the world of woe, this foretaste of a stormless world to come.

Produced by The Button Box, the free-reed emporium recently relocated to Sunderland, Mass., NESI is, appropriately, a free-form revel largely improvised by its revelers.  It consists of workshops, musical caucuses, jam sessions, eating and drinking, spontaneous tutorials and can-you-top-this virtuoso challenges, culminating in the Saturday night Cabaret and Contra Dance and an open-ended pub sing.  Most workshops are scheduled on the spot and anyone may teach, lead, attend or simply hang out at the Manor House, where the cash bar is always open, or in the Button Box sales room located in the Barn.

Bucksteep’s motel-style accommodations are comfortable and clean; less expensive bunk-housing and campsites are available, with or without comestibles.  Speaking of food, the viands have leapt an octave in quality since being entrusted to Rich Nawrocki and Creative Catering.  Saturday night’s garlicky roast beef, rare and sliced on the board, and ginger glazed salmon filets were especially notable.  Vegetarians did not go undernourished, but late risers did, as breakfast was withdrawn promptly at the appointed hour.

Friday arrivals drifted among old friends.  Sessions organized (and disorganized) themselves in the Manor House and on the porch as the weekend’s reckless race to pleasure cranked up.  A few familiar faces were missing, chief among them Lynn and Tony Hughes – Tony is recovering from a health crisis precipitated by an attack of yellow jackets – and Isabel Eccles, also meeting a health challenge.  They were missed, and we send love to these and other absent co-conspirators and hope they’re all still crazy and back with “their people” next September.

At the Button Box sales room, the emporium’s new and used instrument inventory, tapes, CDs, books and instruments on consignment sale were all available for inspection, testing and purchase.  Featured offerings included not only vintage Wheatstones and Jeffries but the contemporary Morse line of concertinas, whose creator, Rich Morse (founder of The Button Box, and one of the few Morris dancers able to jig to his own melodeon accompaniment) was on hand.

Workshop and session venues included the spacious Barn, two gazebos, two tents (unusable in the Saturday deluge) and the acoustically brilliant stone chapel near the Manor gate.  Players could attend Scottish, Irish, Morris and Quebecois workshops, a class in instrument repair offered by Frank Edgley, and an introduction to the Duet concertina.  Midway through Saturday’s tempest, a tremendous blast shook the Manor House to its foundation.  Stewart Dean announced the world had ended.  After a short prayer, the music resumed.  (Stewart was later discovered to have been misinformed.)

Free-reedniks are an incredibly friendly breed, and NESI sometimes seems like a congress of golden retrievers.  Players thrust their instruments on one another, urging everyone to have a go at it.  Tunes are rendered and slowly re-rendered for instruction, taping or notation.  Experts initiate novices into the arcana of Irish or Quebec ornamentation, progress is noted in returnees who were beginners a year ago, kids are welcome and included if they play.  Banjoists, fiddlers and guitarists are regarded as fellow-travelers.  In fact, the whole weekend is promiscuously sociable, but we won’t go into the seamier (unbuttoned) side of the free-reed scene other than to say that it has been a number of years since it’s been warm enough to fire up the hot tub.

The balance of power among instruments varies from year to year.  Button accordions predominated in the 90s, but in recent years concertinas, particularly English, have proliferated.  The sometimes-disrespected piano accordion – with its eleventy-thousand basses (making it possible to play in keys with more sharps than a poker table) and its unfortunate association with pencil moustaches, “Lady of Spain” and R.V. rallies at Shoney’s – flourished this year in all its mother-of-pearlescence.  But no free-reed goes unflourished at these pandaemonia.  Bob Godfried has introduced antique harmoniums (brought for display from his formidable collection); melodicas, once regarded as a mere step up the evolutionary ladder from the hair-comb kazoo, were on exhibit (ask me sometime and I’ll sing you the TV jingle used in Hohner’s first and only melodica ad campaign); and who can forget Ken Sweeney at past Cabarets playing with himself on concertina and harmonica? 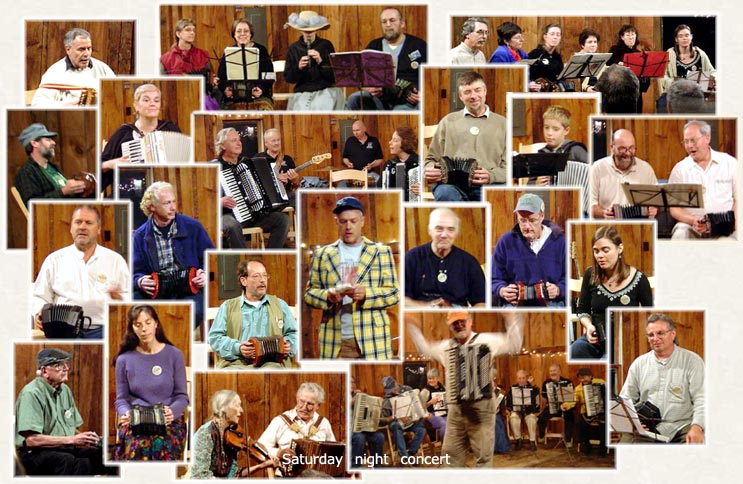 Saturday night, as always, featured the festive march from the Manor House to the barn, where the program began with the star-studded international Cabaret, a farrago of participant performers, interdigitated with the groan-inspiring Limerick Contest.  Cabaret highlights (there were no lows) included: swing maven 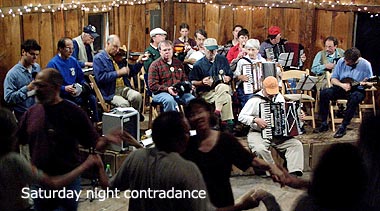 Craig Hollingsworth (of The Gypsy Wranglers) leading an accordion band in “My Blue Heaven,”; South African native Sean Minnie and friends playing a Boer polka; Ken Sweeney bringing down the house with Shel Silverstein’s mermaid song; the Squeeze Play accordion band; national treasures Deanna Stiles and Bob McQuillen (steady left hand of New England contra dancing); Rachel Hall both in solo and with a concertina band; and Allison Aldrich sharing a musical tribute on the Jeffries concertina to her late partner, Byron Smith, known and loved as a dancer, musician and founder of Kairos Audio.

After sixteen years, the NESI Philharmonic, convened annually “for all who will” under Craig’s “one-and-a-two-and-a” for the Saturday contra dance, has acquired creditable chops and a core repertoire.  Called by Ethan Plunkett, the dance picked up where the Cabaret left off, concluding at midnight with a performance by a late-arriving Cape Verdean accordion ensemble.  The stamina-blessed could go on to the pub sing and session (fueled by bowls of M&M’s) at the Lodge, which did not adjourn until the small hours were getting large.

Staggering into a bright, rinsed Sunday morning, squeezers converged on the sumptuous brunch table and then, as if to see how much fun the body can take, plunged into more workshops and sessions before reluctantly packing up and returning to the drab, squalid world.  But the weekend produced in this participant, anyway, a rush of endogenous opiates that helped me survive the blows of November, and I look forward to renewing that musical high at the next NESI (scheduled for September 16-18, 2005).  Heartfelt thanks to Rich Morse, Doug Creighton, Craig Hollingsworth and the Button Box staff for making it all happen. 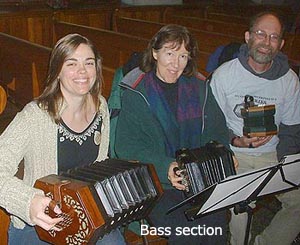 Rich here .... I'd like to add a PS about the very special concertina band workshop we had this year. Typically we work on some multi-part piece, usually a Sousa march or other popular "tune-of-the-day" - but this year we had a piece created for us! Last year I got to know Mike Knudsen through the r.m.ragtime newsgroup (being a ragtime aficionado myself) and was quite taken by his rendition of City of Ships which is a tribute and booster song for Bath, Maine USA, to advertise the virtues of this three-century-old center of New England shipbuilding. My idea of reworking the City of Ships into standard concertina band format was quite appealing to him - which made for an interesting, fun, and often time-consuming summer project. We finished up only a week before NESI. Our collaboration yielded 6 parts including two new sections Mike had created just for our presentation.

Unfortunately the recording we had made during the concert didn't work out.... Here's an mp3 of our midi score (227KB). Close your eyes and sense the ships rocking on the ocean, watch out for the "Fog Horns and Shipwreck" section (secretly sub-titled "More work for our shipbuilders"), the lamentation during the depression when times were slow for the shipbuilding industry, and the hopes for better times. In the piece the sequential instrument entry and simple melody was shared by all parts from piccolo to both treble and baritone parts to the bass. The favorite of all was to be Monty the bass concertina, played by Rachel Hall.

Mike can be reached through his home page which features many of his compositions.