Pictured here are about half of the 120-odd participants that attended this year's 13th annual shindig held at Bucksteep Manor in western Massachusetts (next year let's do the photo session earlier on Sunday - or maybe even on Saturday?). A lot of new faces, many familiar ones, and a few returnees from years ago... Serious Squeeze-In  cohort, roady, groupie, and veteran Craig Hollingsworth provides us with:

Here're a few notes on the Northeast Squeeze-In. Disclaimer: as a participant in organizing the event, I may be a little biased, but I had a GREAT TIME! Sq@#$%^&b9x list servers attending included Randy Kirchenbaum (sorry about the spelling), Moshe Braner (chromatic accordion!), Rich Morse (of course), and Alan Watsky (this guy really knows what he is doing - great playing on fiddle, English concertina and jazz guitar). Bob Alexander was on his way, but became ill and spent the weekend in the Albany Hospital - major bummer! 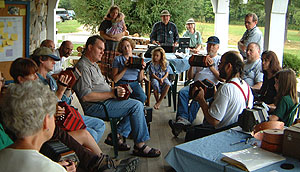 The weather was grand. The usual workshops, like: what else to do with an English concertina; Anglo Concertina (Jody Kruskal is a genius with an amazing style on Anglo); French Canadian tunes; Irish tunes; Contra tunes; accordion band; concertina band....... 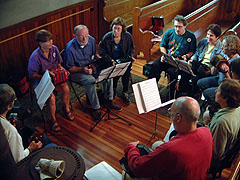 Then, eating, drinking and jamming.  I only stayed up until 2 o'clock on Friday and Saturday, so I missed the 4 o'clock rock and roll.  Apparently, not all of the people sleeping in the Manor missed that session.

A really fine concert on Saturday night: 24 acts of one tune each.  It led off with 5 different concertina players, beautifully performing  American, Irish, Scottish, Swedish and original tunes.  Great singers, including David Cornell with his McCann duet concertina. Isabel and Francheska played a Brazillian forro duet on 2 accordions. The classical accordionist brought down the house with the William Tell Overture complete with sets of tight bellow shakes. There was a gospel accordion quartet.  Then the accordion band played "Swing Gitan" and the concertina closed the concert with something that sounded like Gilbert and Sullivan (D Cornell on vocals).  THEN the contra dance - as usual, fueled with Wild Turkey, I got to lead the band which, as the bottle got emptier, got a little wilder.  About 20 musicians in the band. A high point as  Jody Kruskal took a break on "Dancing Bear" on alto sax.

Oh - Bob McQuillen (he wrote Dancing Bear) was not with us this year - his "other gig," as he had described it on the phone,  was a black tie dinner in Washington DC where he was honored as a "national treasure" for his contribution to  New England traditional music. Then we played a little swing, a little polka, and I headed back tot he manor where a more jamming and singing (see above ensued).  My favorite song was Tony and Lynn Hughes version of "Never Use the F-Word with Your Mother"  (It starts something like... There are pirates, pierced and tattooed .....).

The best quote of the weekend was when Steff's partner was explaining why they had had to come to the Squeeze-In.   Steff, the accordionist,  had pleaded, " I have to be with my people."  And that is how many of us felt.

And here's what  Kate Poole, a newcomer to our event, had to say about it:

Wow! What a weekend. Over one hundred accordions and concertinas all in one place! Falling asleep amid squeezing boxes and waking to them in the morning  ---- such music to my ears. I mean, when was the last time I stayed up until 5:30 a.m. just having so much fun?

The first morning when I awoke very early  to those reedy tunes my first reaction was to jump out of bed, thinking "Hey, wait for me!" The workshops, dancing, concert, and all that jamming were amazing. It was a real gift to be around so many incredible musicians who were happy to jam with anyone who enjoys the music. Alone with my squeezebox and a tune book for the last several years, I didn't know what I was missing.

The Squeeze-In has given me a new enthusiasm for music, renewed excitement about the concertina, and more confidence in learning my instrument well. So, now, having found "my people", I say FREE the REEDS!

Returnee from many years ago Jody Kruskal was very pleased that he was able to be with us again. Beyond being a wonderful musician and all around great guy - he's quite the wit too! Not only did he come in 2nd place in the limerick contest, but was moved to send us these treats that he made up while whiling away the hours driving back home from the event.