Back to Recollections  |  NESI HOME I was surprised that there were many first timers there when we were raising our hands... and would I come back next year? HECK  YES! My honey and I drove up from New Jersey and I was surprised at how quickly we got there... only 5 or 6 hours... and the ride was beautiful. The weather was great. 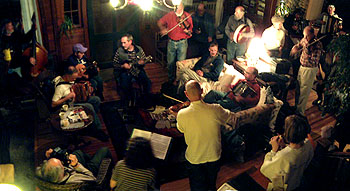 We arrived around 4 pm and was greeted by Craig Hollingsworth at the check in. I had asked if anyone was here from the Squeezebox Newsgroup and he mentioned Dierdre and Moisha and himself along with Dave Barnert and others.  It was great to have a face with names! And I sought out to make friends with those whose names and postings I knew (for a start).  My honey is a bass player with the contra band in Philly called The Spuds and also plays with the Philadelphia Céilí Group along with The Holmesburg Jam, the bluegrass group that I play with. He brought his bass along as we are always up for a jam.  He knew 3 people at this accordion event! Sam, who calls for the Spuds contra dances and Bob McQuillan and Deana!  Whoda thought!

Anyway, we enjoyed the jams Friday night. I fortunately found a chair in between 2 rooms so all I had to do was turn around to play with either one. I jammed a bit on guitar that night as I left my box in the van and was having too much fun to leave and go get it. There were ALL kinds of players there...such a wonderful variety... Irish players, polka players, sea shanty singers, Middle Eastern tunes... anything you ever wanted to hear.  There were several fiddle players, a few guitarists, mandolins, etc.


It was pretty cold Friday night and pretty hard to get out of my sleeping bag on Saturday, but coffee was brewin' and I waking up to smell it. There were many great workshops offered on Saturday such as playing by ear, klezmer, diatonics, concertina band, Squeezeplay workshop, Stompin' at the Savoy (learn a big band tune and play it for the concert) , contra dance
workshop and more.  I chose the latter 2.  After lunch, I asked John from Accordions Forever if he had time to give me some left hand technique pointers.  So I got a great lesson from an accordionist that I admire. He also taught me the difference between a musician who plays the accordion in a band and an accordionist.   Thanks, John.
All day, wherever you walked, there were people playing in little jams in the lodge or the meadow or the porch. I saw some very beautiful accordions too which sparked my visual artistic side.  The one that Craig plays is quite a beauty along with the purple sparkly one which a woman had that Craig played duets with in the meadow. The sparkles looked like red & green
planets on the purple background flashing in the fall sunlight and sounded like the best accordion sound I had ever heard.

There was every sort of squeezin' your hungry accordion soul could want. All of the food was really great. Goose and I ate well for a change. He even tried some foods that he never had before like hummus and tofu.  After dinner... all of a great sudden there was a deafening silence and we realized that everyone had gone to the barn for the concert! Lynn was a great MC with a laugh a minute.  And as Craig said the music ranged from brave to excellent... and of ALL varieties.  There were even
some unique performances such as the guy with the cranked roll player (like a player piano sort of thing) and Squeezy & Wheezy who played "Sleighride" on a portable pump organ and concertina duet complete with sleighbells and Santa hats.  I liked Bob's strapless performance... kind of "alternative" style.  And the concertina band's rendition of Sousa's "Thunder" was a great way to round off the evening. Did I mention the "Star Spangled Banner" which opened the concert? Not a dry eye.... I felt Stompin' at the Savoy went rather well also for skills ranging from beginner to pro in the band. I had always wanted to join an accordion band or orchestra and finally got the opportunity.

The contra dance workshop was another revelation for me also. I had always wanted to play with the Spuds but did not know how to get ahold of the music to study. I found out The Fiddler's Fake Book (whoda thunk!?) is a great resource for that and off we went. Wow! I wasn't the only one who was in search of these little "secrets" as I talked with some of my fellow players. Craig is a wonderful teacher and mover and shaker... not mention his wealth of songs and style of playing. 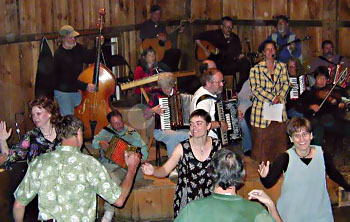 After the concert, the contra dance began and it was a lot of fun.  I think "Dancing Bear" is my favorite now and I have put out a search for the music. (penned by Bob McQuillan)  We also played an impromptu "Amelia" waltz and Bob McQ said he thought that it was the prettiest he had heard it played (awww shucks, Bob!). I asked some of the people I met if they knew about the Squeezebox Newsgroup and many of them did not but wanted to know how to find it. So I gave them directions.

We left for Jersey before the group picture was taken on Sunday (darn!) but went away feeling like we had one of the best times on all accounts... and believe me, we both travel to many musical events all over (I used to be a journalist in the world music scene)... and this one was one of the best in a personal sense.

By the way, The Button Box people were really great.  They had many resources there for purchase along with boxes of all types. After Dave Barnert explained to me about what a Hayden duet concertina was all about, I wanted to buy one, but alas... my future husband said that that one will to wait for now (sigh!). He already knows that one can NEVER have too many accordions!

I came away with some tools and knowledge that I can practice with now along with some new friends and a feeling of community with my fellow squeezers which was important to me as playing in a bluegrass band, I am the only squeezer... and do not get to socialize with other squeezers and be able to talk about squeeze stuff too often. My goal in coming here was to get OUT of my regular genre and learn something ELSE. So thanks to everyone for a great time and I hope to see you next year.  If you can make it to one, please DO.  You'll have a little vacation, eat well, meet new friends and gain some knowledge while having a good time.

And now... a note from ButtonBoxer
Richard Morse

Thank you Lugene! I'm very appreciative of your allowing us to post your S-I memoirs which lets me off the hook (somewhat) for doing the review this year. I look forward to others sharing their experiences of this event in the future!